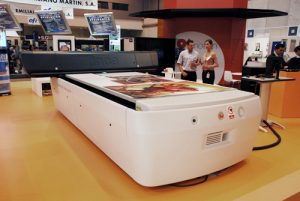 Staffordshire based Daytona Visual Marketing supplies some of the most influential brand names in the world with outdoor work such as banners, posters and vehicle displays, as well as indoor graphics such as in-store signage, packaging and window advertisements.  With its customer portfolio including international manufacturers such as Sony and Mercedes-Benz, along with a number of leading UK retailers such as Argos and Woolworths, Daytona realises the importance of staying ahead of the competition through implementing the latest in technology and innovation.

The company began life as a traditional screen printing business back in 1979 and has since become a £3million turnover company that has built up a comprehensive digital outfit in recent years, which today accounts for around 35 percent of the company’s total business.

According to Andy Wassall the managing director of Daytona, today’s typical screen printer is aware of the potential benefits that a digital printer can bring, such as the ability to produce economical runs of 1-100 and the opportunity to print a wide range of both flexible and rigid materials.  In particular, the number of printers installing inkjet flatbed technology is on the rise largely due to the high quality and consistency such machines can now achieve.  As a result, Mr Wassall says customers are coming to expect the consistent results made possible through this method of production.

For Daytona Visual Marketing, its six-colour Inca Spyder 320+ with light-cyan and magenta, supplied by Fujifilm Sericol back in 2006, has provided a steadfast way of providing customers with the predictable results they are looking for time and time again.  The last eighteen months has seen Daytona’s Spyder 320+ working to maximum capacity producing runs of around 50 and under.

Typically, the company uses the Spyder 320+ to jet onto medium format (A4/A5) materials used for both indoor and outdoor applications.  So effective is the flatbed machine at producing high-quality results with minimum set-up time that it takes on all of Daytona’s digital flatbed work and the company now only uses its line-up of hybrid machines for printing flexible substrates roll to roll.

Mr Wassall, who claims the quality and reliability of the Spyder 320+ has more than lived-up to his expectations over the last eighteen months, has now endorsed Inca’s technology with the installation of a further six-colour machine: this time a Spyder Q machine with a white ink option.  Instead of adding light cyan and light magenta to the standard CMYK which is also available on the 320 Q.

The Spyder 320 Q was introduced in 2007 to compliment Inca’s range of flatbed systems and has been labelled as being Inca’s fine quality machine due to its smaller, 10 picolitre drops.  The technology incorporates a new printhead, which is exclusive to the Spyder 320 Q.  The new printer delivers a sharp resolution and speeds up to 37 square metres per hour.  This latest addition to Daytona’s digital print facility means its screen systems are further freed from short-run jobs.  The Spyder 320 Q also increases the scope of work the company can produce digitally by producing photographic-quality work directly onto flexible and rigid substrates up to 30mm thick.

As with all inks designed for use with Inca’s technology, the white UV ink formula used with Daytona’s Spyder 320 Q has been developed by Fujifilm Sericol.  In one month of operation alone, Daytona has won five significant new clients, who have been attracted by the Spyder 320 Q’s ability to deliver photographic-quality prints.  The company has since used the machine with its white option to print onto glass for gaming machines, POS vinyls and reverse printed window stickers.

Mr Wassall comments:  “Fujifilm Sericol has improved the quality of the white ink to such an extent that it is on a par with litho printing.  We have even printed very fine text with the white ink on the Spyder 320 Q; down to 4pt.  We have not been able to achieve such definite results with our screen systems in the past.  The opacity of the tone is truly remarkable and has paved the way for us to produce high-quality economical short-runs for companies that use white, as well as a spectrum of other colours, in their branding and products.”

Mr Wassall concludes:  “Large format and display printing is an exciting area to be in at the moment as the traditional methods of producing everything from bus and taxi posters to POS items are being challenged by the products introduced from manufacturers like Inca and Fujifilm Sericol over the last few years.  Rather than shy away from these challenges, the team at Daytona embraces the innovation such technology brings and we look forward to putting our new Spyder 320 Q through its paces as we did with our original machine.

“We’re delighted to be in a position to take on a second machine just months after entering into the digital flatbed market and the fact that we have done so proves not only the revenue potential of this particular machine, but also our confidence in the reliability of the technology and the level of customer service we have received from our suppliers.” 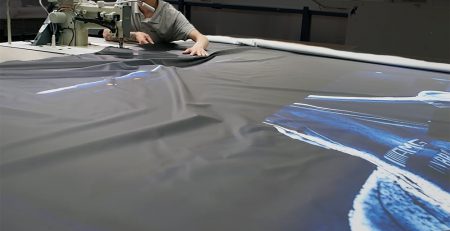 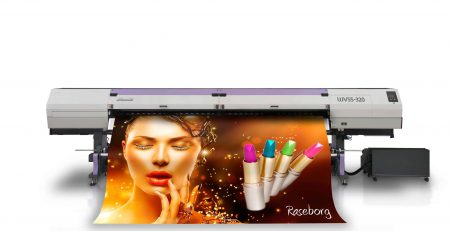 Daytona Visual has added the Mimaki UJV55 320 super wide grand format machine to our line up. Output is... read more 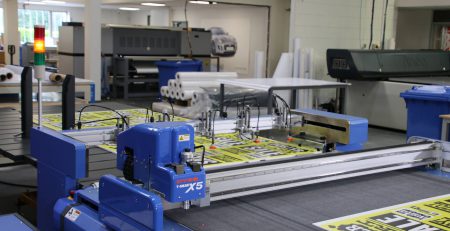 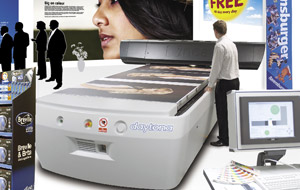 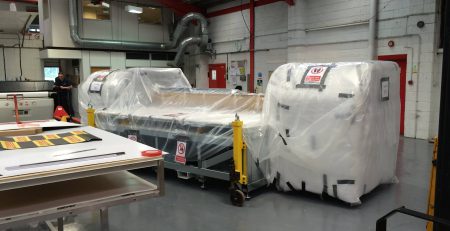 Investing in our future. And yours. Over the last two years Daytona Visual has invested heavily in new technology. This... read more

Display Unit free standing leaflet display stand FSDU GrafikPod leaflet dispenser literature dispenser Point of Sale POS signage What is point of sale display
BESPOKE SERVICES ➥NewsCONTACT USWE'RE READY!
DaytonaVisual.uk uses cookies to help give you the best experience on our site. By continuing you agree to our use of cookies.OkPrivacy policy